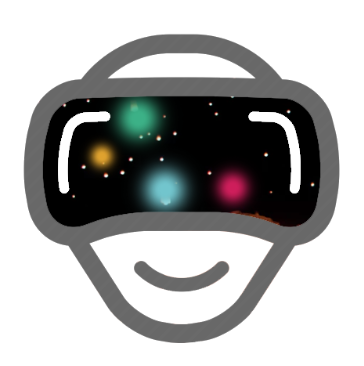 Creating a Rise course with VR content is easy. Experiences can include interactive virtual reality/augmented reality, 360-degree videos or 3D models. This is the easiest way to embed VR in Articulate 360.

This brief guide takes the user through the process of including a LearnBrite experience in Articulate Rise 360.

How do I track a user’s score?

I want to include a LearnBrite space in Rise 360, what do I need to do?

I don’t want the project to submit the score automatically

Can I insert my own slides in the project?

The module is very small in Rise 360!

Adding the module to Rise 360

Add through an embed code

Getting the embed code

Embedding the code in Rise 360

Exporting Rise 360 course to an LMS

When uploading through Storyline 360

How the .story file works

How do I track a user’s score?

If the user’s score depends on a variety of factors, the easiest way to track it is by using ChatMapper (see our guide on tracking a score in ChatMapper).

If the score can be tracked through a simple user interaction, you can trigger the submission through (for example) clicking on an object, see our guide.

I want to include a LearnBrite space in Rise 360, what do I need to do?

If recording a score is required, then follow the steps in “Add through Dashboard export”.

If only having the space in the course is enough, we still suggest following the above guide, but you can also follow the steps in “Add through an embed code”.

I don’t want the project to submit the score automatically

You can then follow the “Add through Dashboard export” section almost as-is; the only requirement to deactivate this behaviour is setting the “SubmitScoreWhenReceived” Storyline variable to False before publishing to Review 360.

Can I insert my own slides in the project?

Absolutely, that is why we provide a project file in the first place 🙂 Slides can be inserted both before and after the ones already included in the project. For instance, you could insert an introductory slide before the first, or a “recap” slide between the first and second.

The module is very small in Rise 360!

The default size of Storyline blocks is indeed quite small, but that can be changed by following the steps  in “Changing the size”.

The recommended way to integrate a LearnBrite space in Rise 360 is to do so through Storyline 360.

After creating the space, it will be visible in the list at https://app.learnbrite.com/dashboard. To save the pre-generated Storyline 360 project file, 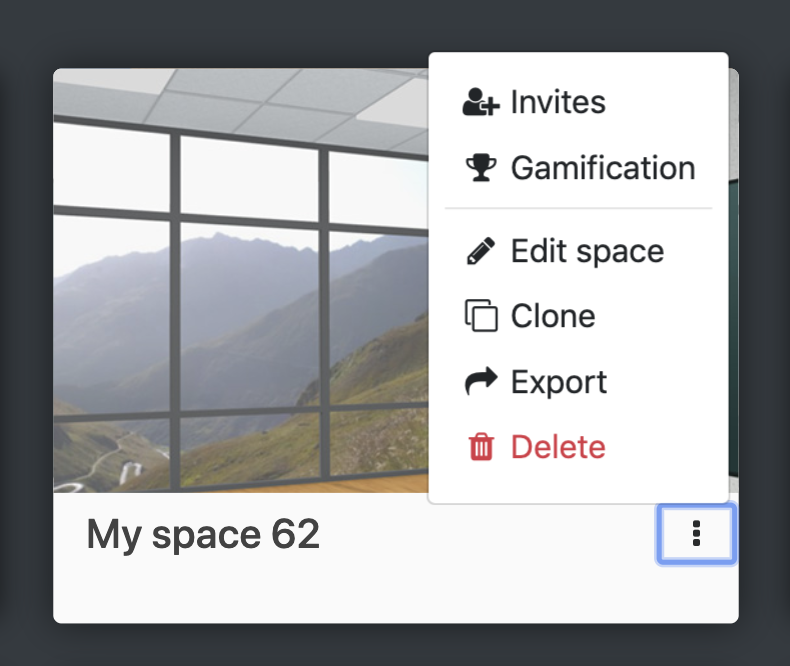 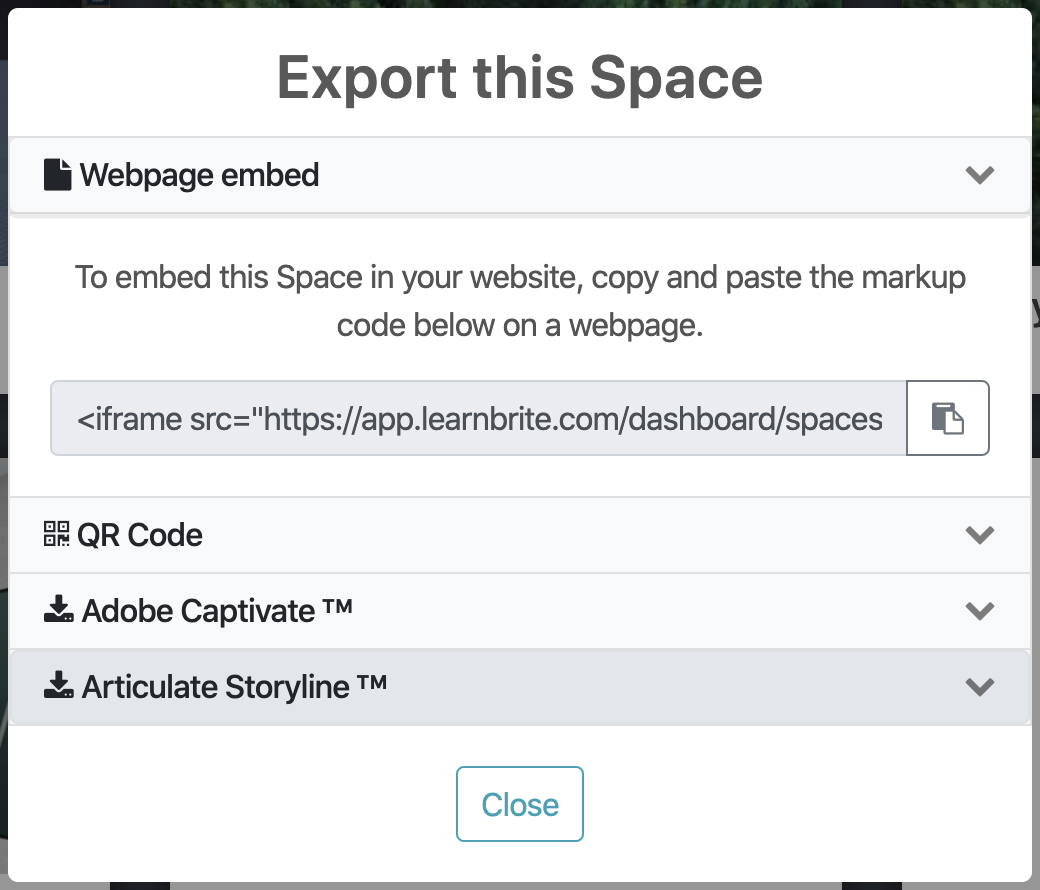 You can now open the project in Storyline 360.

This project file comes pre-filled with the data needed to communicate between Scenario and Rise 360. The only required step is publishing to Review 360. 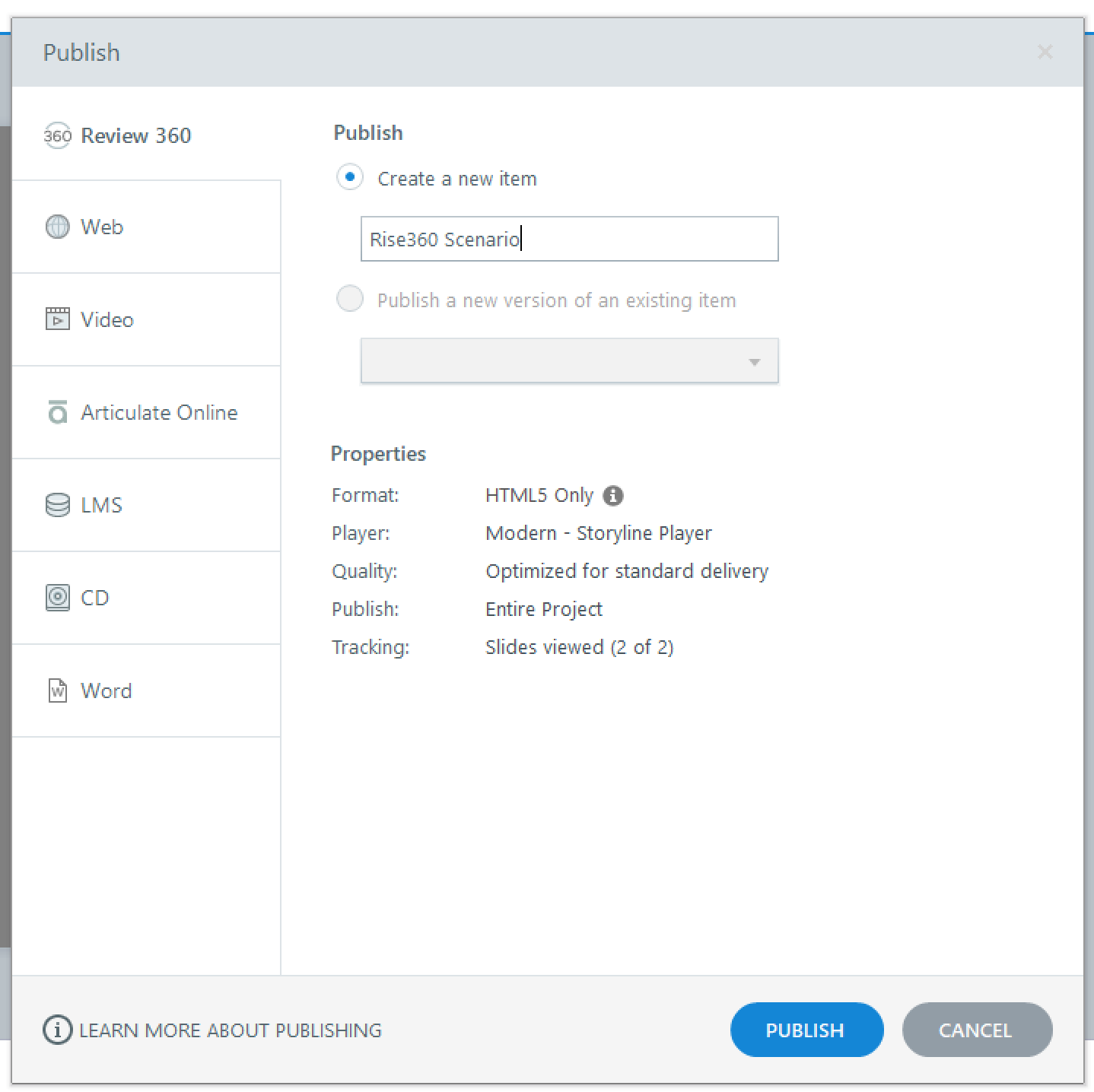 Wait until the upload has finished, then it’s time to add the module to Rise 360!

Adding the module to Rise 360

In a course in Rise, create a new lesson by writing a name and pressing Enter.

Click on All blocks, then in the menu that appears select Interactive and scroll down to Storyline. Click on Storyline. 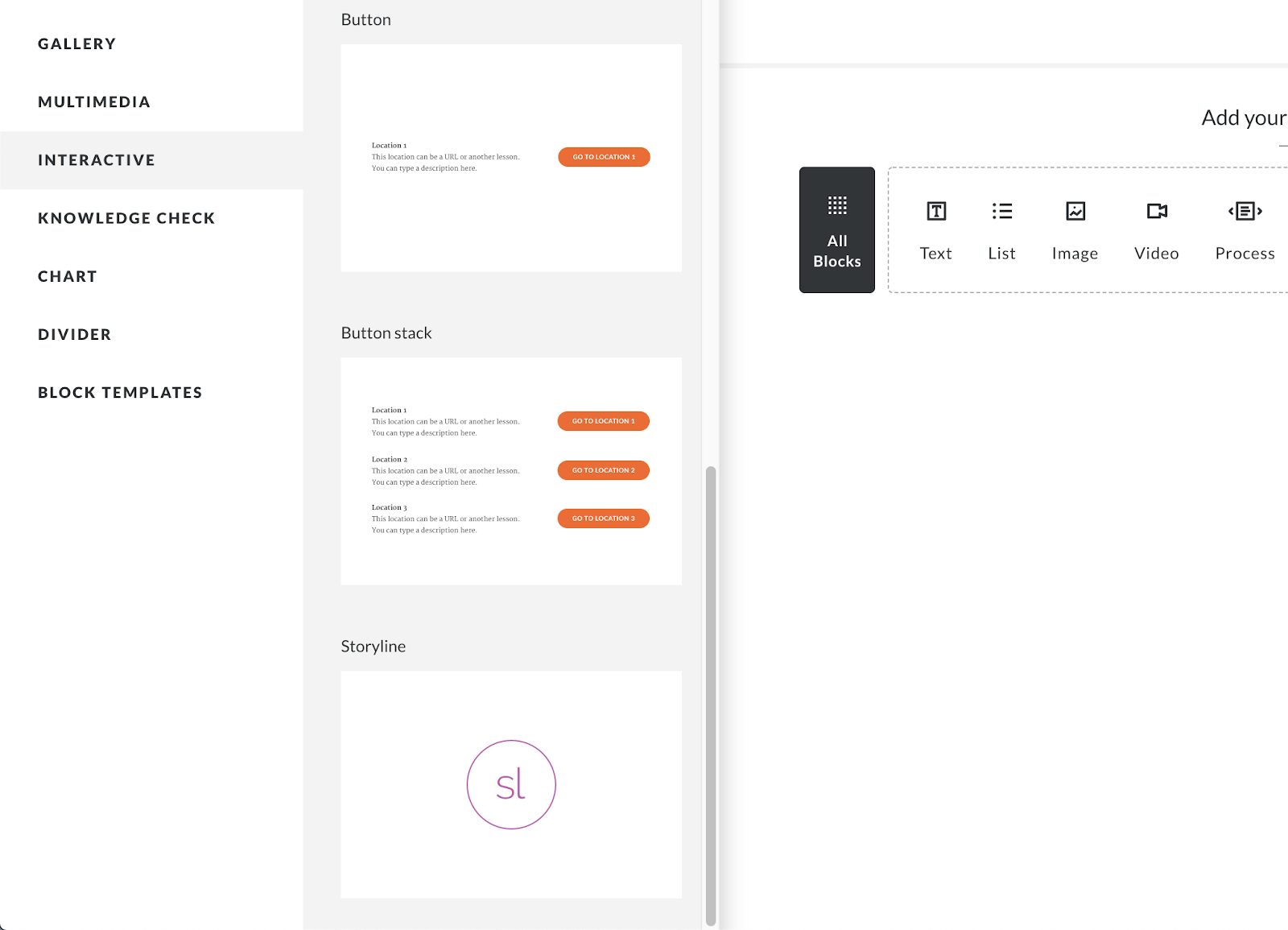 Click on Browse Review 360, and select the course just published. 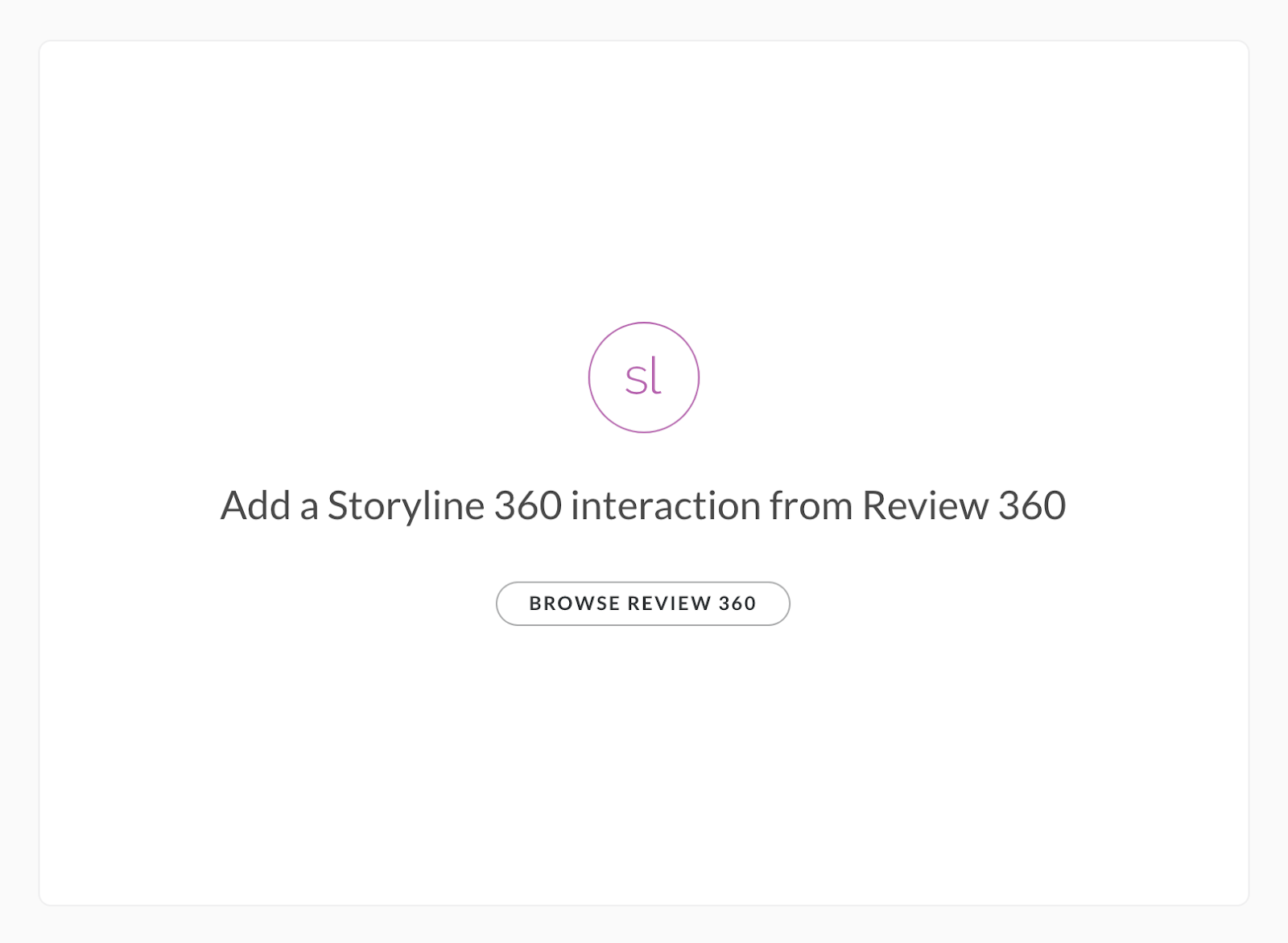 And the space will now be included in the Rise course!

By default, Rise 360 makes the Storyline quite small. This is less than ideal when trying to interact with a space since the available area is so restrictive. It is however possible to change this size in Rise 360.

When editing a lesson (not a course!), hover over the module you want to change and click on Edit at the top left.

Click on Settings, then change “Storyline width” (we recommend changing to Full width). You can also eliminate the padding at the top and bottom.

Close the settings menu, and now the space will use all the available area!

Add through an embed code

It is also possible to embed a LearnBrite scenario as an <iframe>. This method is slightly faster, but has the disadvantage of not being able to communicate a score back to Rise.

Getting the embed code

After creating the space, it will be visible in the list at https://app.learnbrite.com/dashboard, and the embed code needed in Rise has automatically been generated. To copy it, 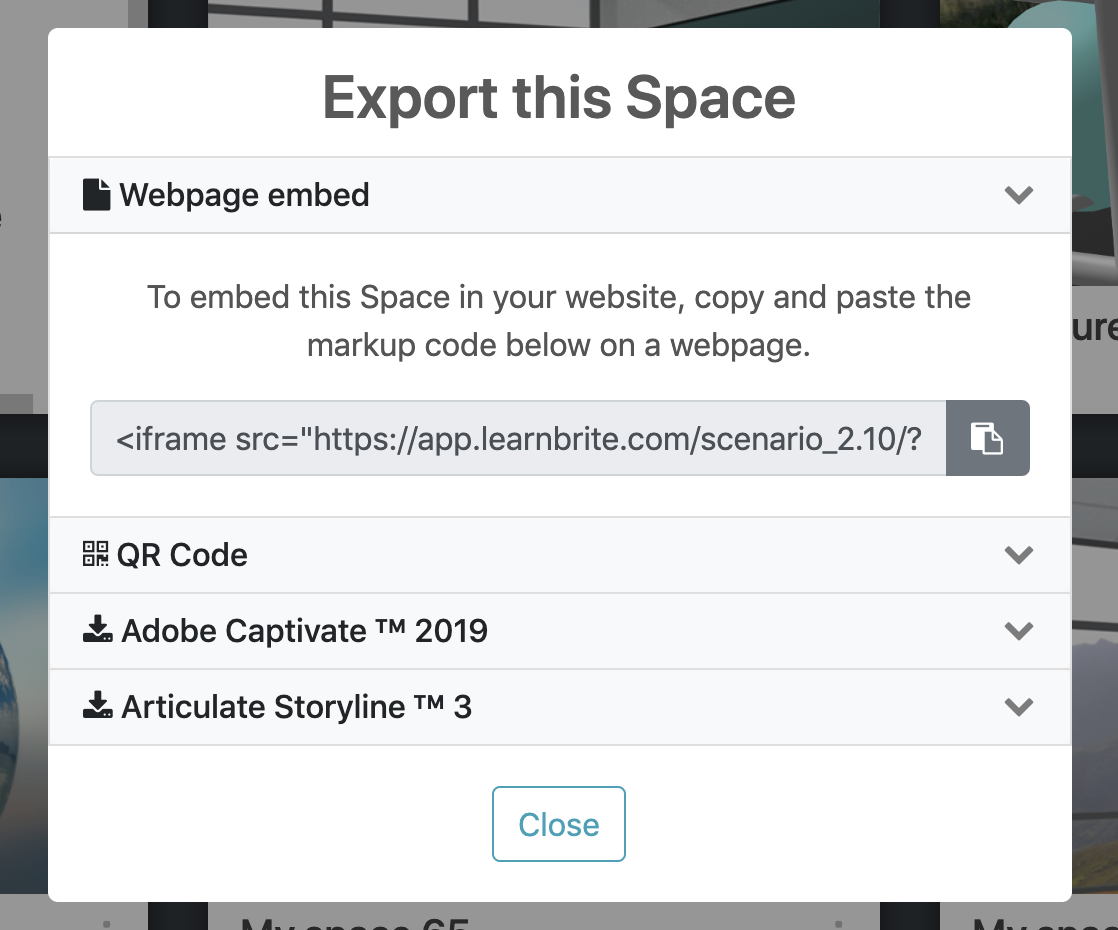 Embedding the code in Rise 360

In Rise, open the page of the course you want to edit (or create a new one), then add a new Lesson by clicking and writing in the Add a lesson title… section, then on the Add content button. Choose Lesson from the dropdown. 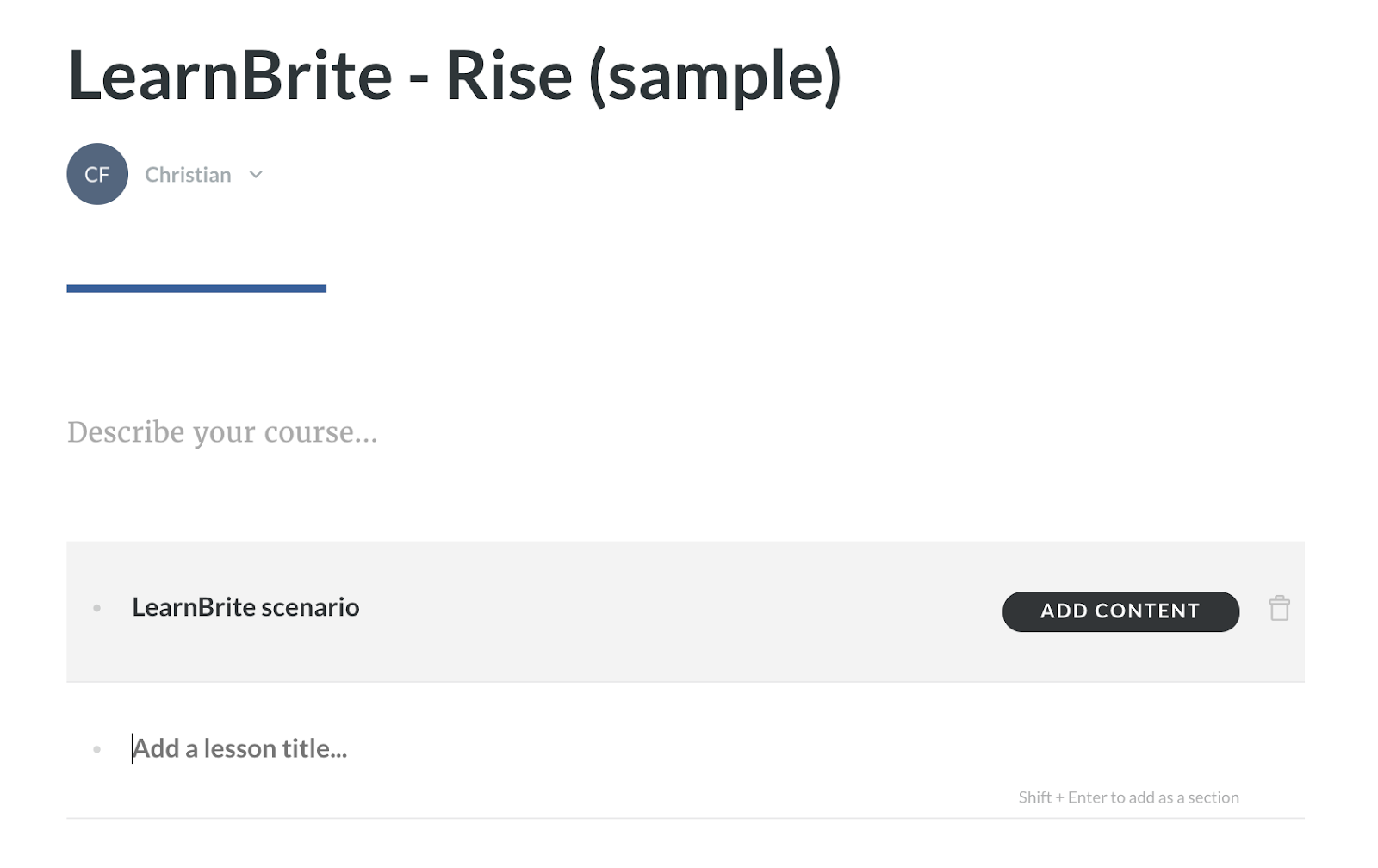 The page of this new lesson will open, to which blocks can be added. For Scenario, click on All blocks on the left.

Then select Multimedia from the sidebar, and then Embed. 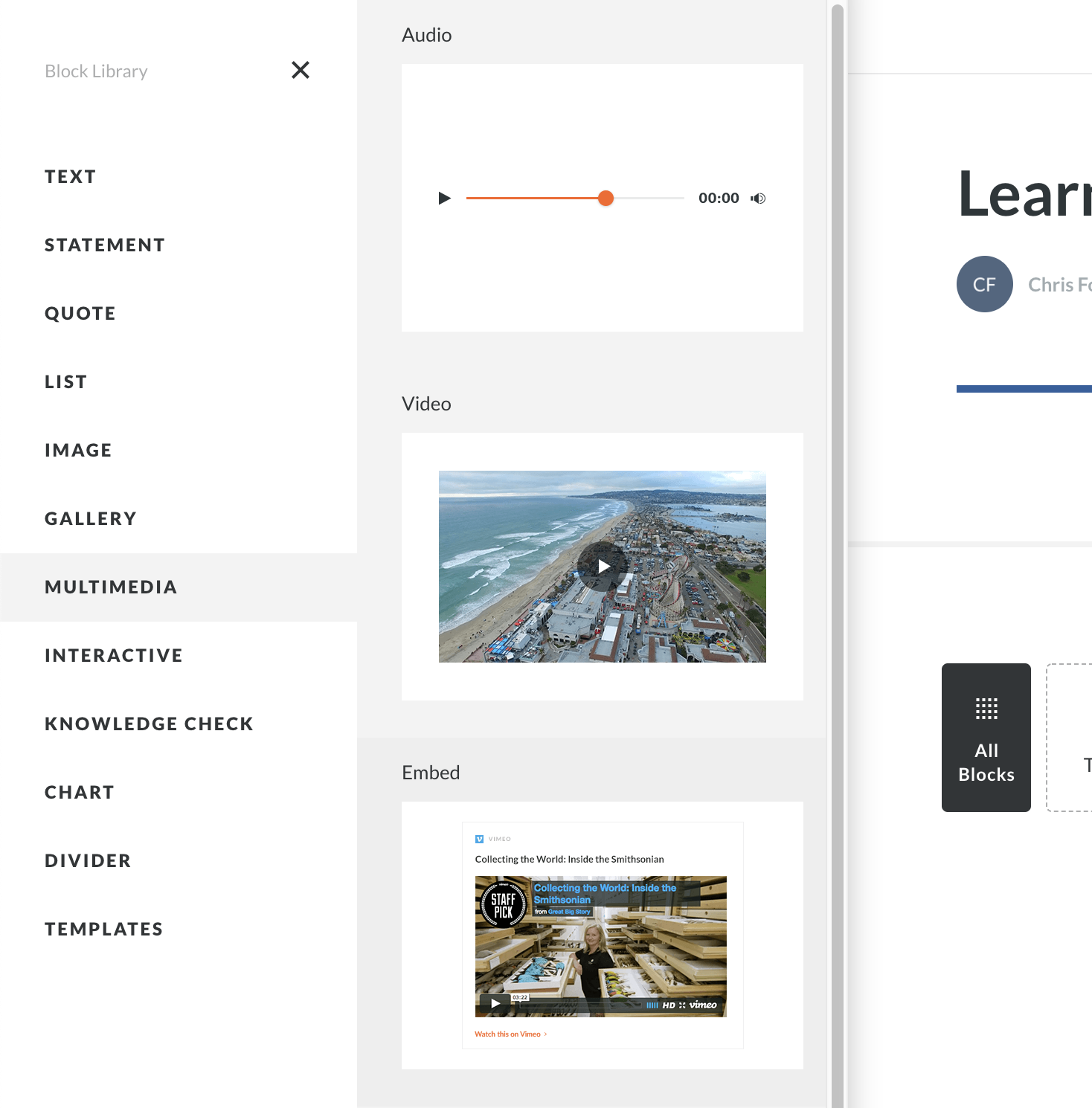 A block with some pre-populated content will be added, which needs to be edited. Fortunately the process is straightforward: 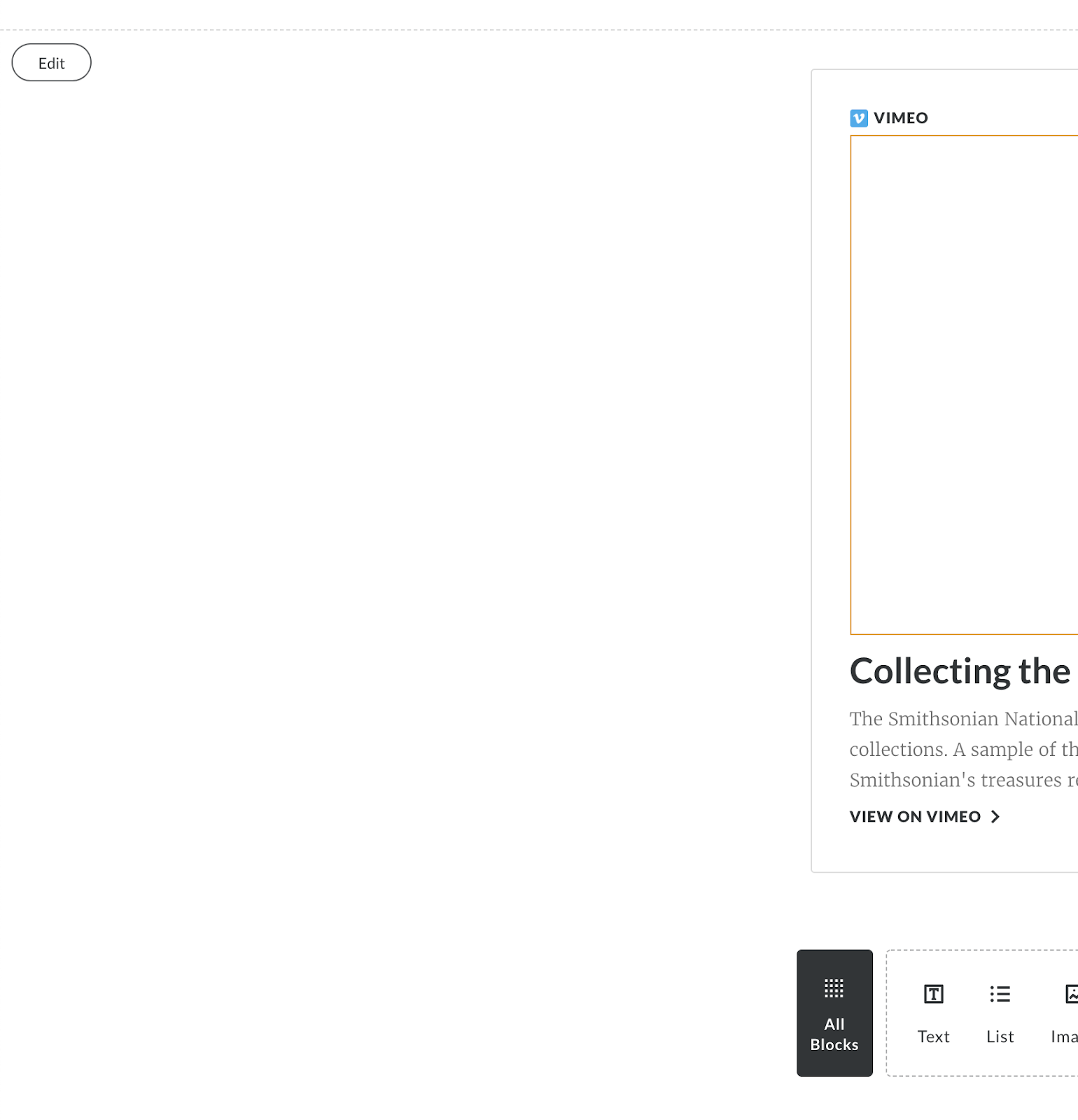 That’s it! The scenario will now be loaded as part of your course. Exporting Rise 360 course to an LMS

It’s possible to export a Rise 360 course and embed it into an LMS. To do so, open the course and click on Export on the top right. 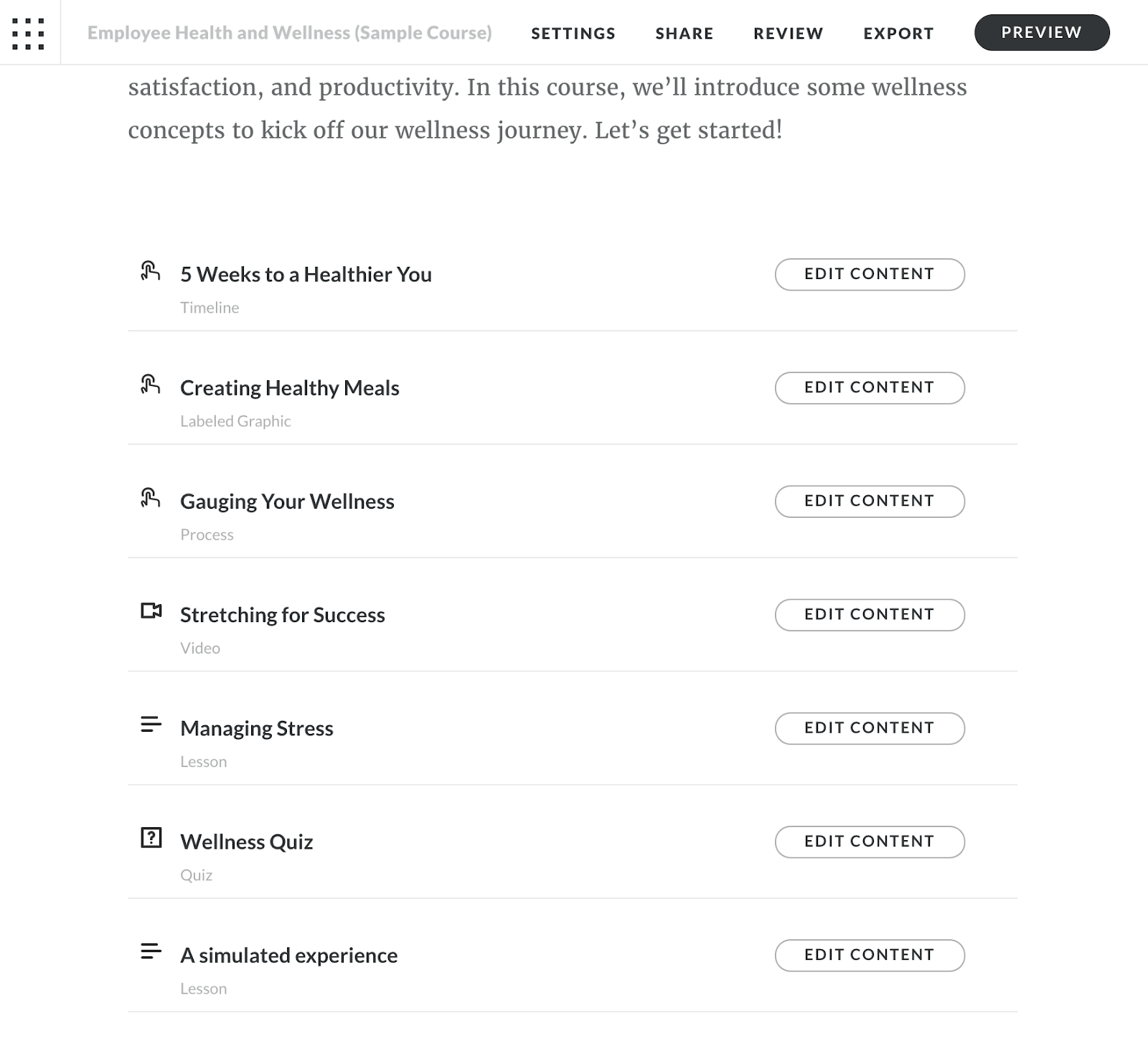 A page with export settings will be shown. If you want to track a score sent from the space, make sure that “Track using Storyline” block is selected in the tracking options, and that the Storyline block that contains the space is selected as well. 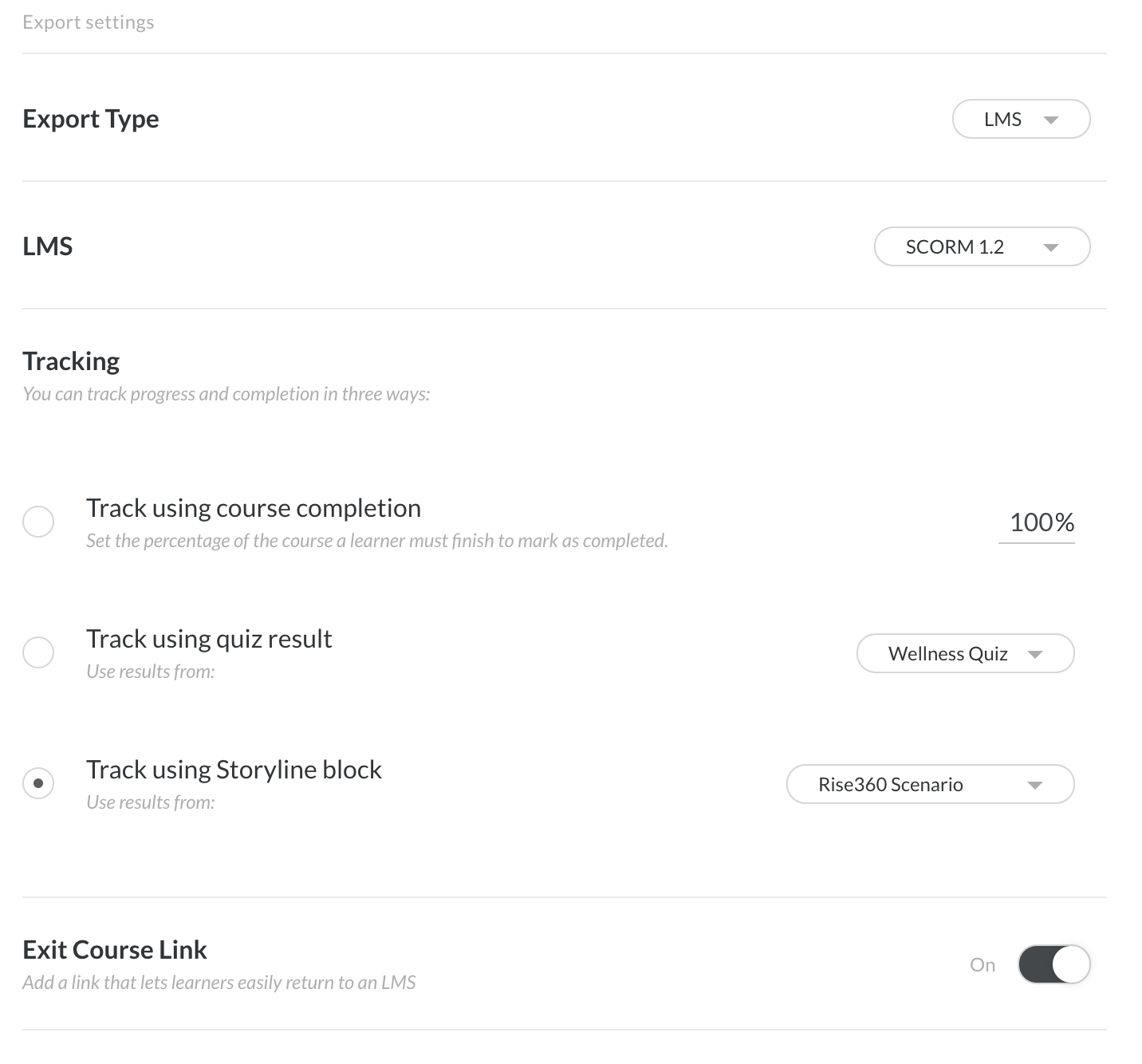 Click on Export at the top right, and you will be able to download the exported package.

When uploading through Storyline 360

The project file is already set up to listen for a score being sent from the LearnBrite space.

To do so, you can either send the score through ChatMapper (please refer to the first section of the Articulate Storyline integration guide, “The ChatMapper scenario”) or directly from an object in the scene (see Appendix III in the same guide). Keep in mind that it is not possible to record this score in Rise 360 – to do so you will need to export the course as a SCORM module, and import it into an LMS.

How the .story file works

What follows is an explanation of how the project file works, and of the variables included within.

The first slide includes the embed and two triggers.

The first trigger to be activated, which happens when the timeline of the slide starts, executes Javascript that will allow Storyline to listen for messages from Scenario.

When Scenario sends a score back to Storyline, this code will trigger to set two variables: CurrentPoints (to the score submitted by Scenario) and ScoreReceived (to “true”).

The change of ScoreReceived from “false” to “true” will trigger the jump from slide 1 to slide 2.

This slide contains two methods of submitting the score, based on the value of “SubmitScoreWhenReceived”.

Both triggers in this slide execute Javascript, and are mostly the same:

If this functionality is required, the suggested workaround is to use the “Direct embed” method of including a space in Rise 360.

When embedding a space directly in Rise 360, scores cannot be recorded in an LMS

This applies to the “Direct embed” method described in this guide. If using the Storyline 360 method is not an option but recording scores is still a requirement, it is possible to collect user scores through LearnBrite’s own tracking platform, Trophio.

Changing the embed code of the space directly in the Storyline project file is unadvisable. Storyline 360 automatically sets the width and height of embedded content to fixed pixel values (e.g. “700px”), which removes its ability to adapt to screen size.

When downloading a project from your Dashboard this is not an issue, as those pixel values are changed to percentage values when generating the file itself, but any change to the embed code will trigger the unwanted behaviour in Storyline again.